The Best of James Bond: Top 5

Considering we’re still none the wiser about the true release date of Bond #25, No Time To Die, there’s surely no better moment to do an all time, best-of-Bond top 5. Granted, there may be 24 films in the series to date, but once you dispense of the spoofy Roger Moore years, the Daniel Craig misfires and the ones where Sean Connery had clearly given up caring, there really is only a dozen or so to choose from.

As a minor disclaimer, before creating this list, I didn’t go back and re-watch every film in the franchise – a single viewing of Moonraker is more than sufficient for one lifetime. With that being said, let’s jump into the definitive list of the top 5 films starring everyone’s favourite sociopathic secret service agent.

END_OF_DOCUMENT_TOKEN_TO_BE_REPLACED

I got a Shudder subscription, the Netflix of horror. Shudder is a subscription service for the horror, thriller, and suspense genres. Enjoy exceptional originals, movies, TV series, podcasts, and live streaming events.

Here is a list of five films I watched on Shudder with no idea of what to expect from them. END_OF_DOCUMENT_TOKEN_TO_BE_REPLACED

With most areas of the world still under strict lockdown, many of us have found ourselves with a great deal more time for TV and film. Personally, it’s been the perfect opportunity to revisit some of my all-time favourites, many of which I hadn’t seen for years.

In doing so, however, I couldn’t help but consider how often we recall things through a rose-tinted lens. Perhaps this is pessimistic, solitary confinement me talking, but I was fairly disappointed to find out that some of my favourite films weren’t as perfect as I had remembered.

From dodgy CGI, to laughable cameos and out of place character moments, a fair few of the top films from the last 20 years actually have some infuriatingly bad scenes. In order to exorcise my lockdown lamentations, I’ve decided to put together the definitive list of bad scenes in great movies, here are the top 5. END_OF_DOCUMENT_TOKEN_TO_BE_REPLACED 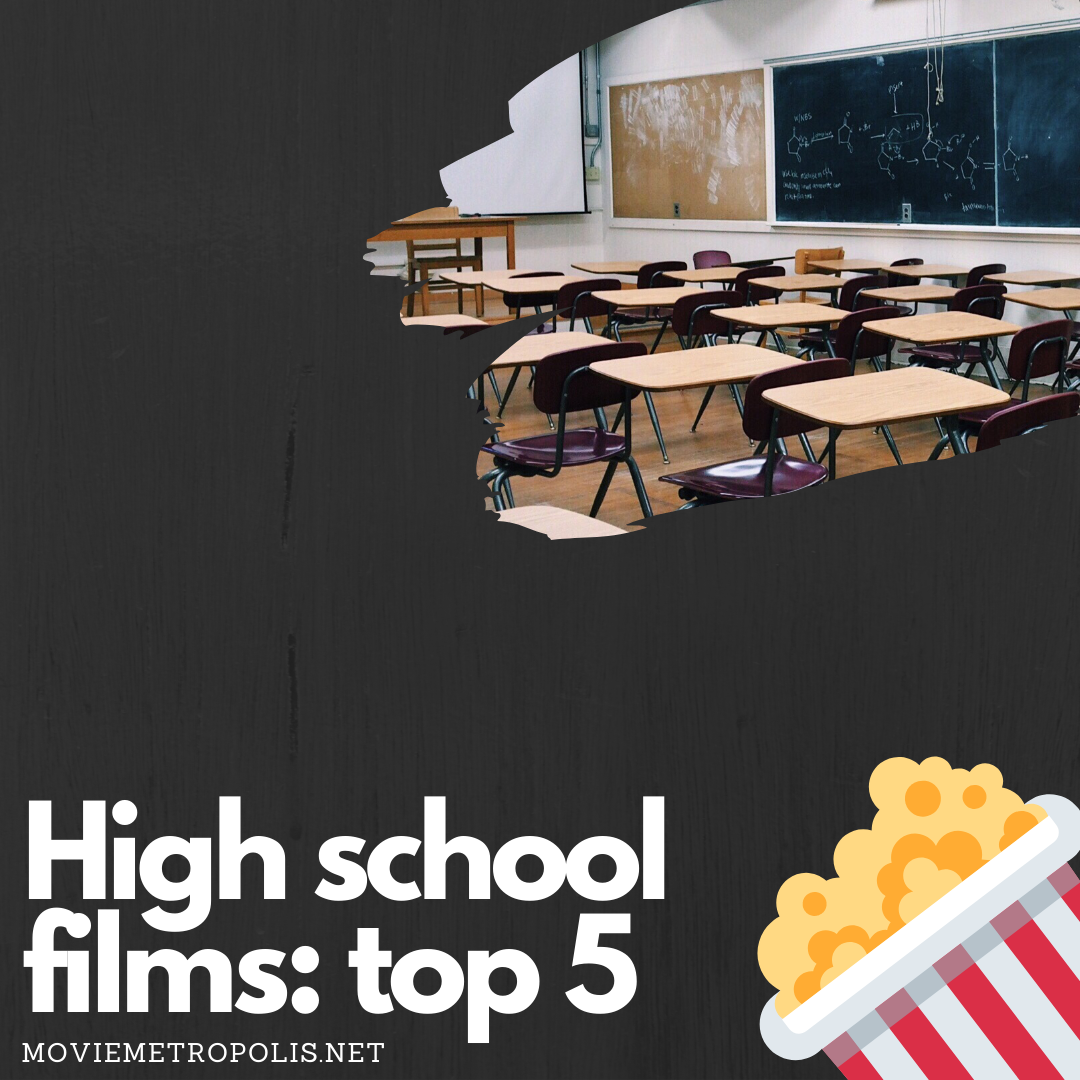 Well, it finally happened. By the time this article is published I will have likely graduated High School. Gotta say, it’s been a long time coming and I can’t wait to have all the hallmarks of a senior year at the end of this long ro- Coronavirus? Oh, that’s not going to happen anymore, is it? Covid-19 cut a lot of senior years short, along with mine, so to counteract this, in between the best picture winners and Bond films I’ve been watching, I’ve also been watching and rewatching a few classic high school films.

They range from the decent like Fast Times at Ridgemont High, the meh Pretty in Pink, or the totally overrated and terrible Superbad. So because of this, I decided to give my top five movies about high school. I did debate about what films would be on this list. I ultimately decided that just because a movie’s starring roles are mainly high schoolers does not qualify, so movies like Lady Bird, Risky Business, and Rushmore don’t make the list. END_OF_DOCUMENT_TOKEN_TO_BE_REPLACED

As we are all well and truly in lockdown mode both in the UK and across the majority of the globe right now we don’t need to feel guilty about missing that party or turning up late to the pub for Friday night drinks, and can simply, Netflix and chill.

Here is a list I have put together of some compelling films currently available to watch on the streaming service, Netflix. There isn’t a particular theme here, but I have tried to cover all bases with the choices I have made. That being said you could say this list goes from darkest to lightest. END_OF_DOCUMENT_TOKEN_TO_BE_REPLACED

The best sci-fi movies of all time: Top 5

Science fiction holds a special place in my heart. There’s a level of escapism that you simply don’t get in any other genres. Whether that be a journey to the centre of the earth or an adventure to a galaxy far, far away; you can be certain to find drama, action, sacrifice and thrilling spectacle.

As a self-proclaimed sci-fi fanatic, this was a very difficult list to write. The competition is strong, and the choices are many. Sacrifices have indeed been made however and so, without further ado, and in no particular order, here are the top 5 greatest science fiction films of all time. END_OF_DOCUMENT_TOKEN_TO_BE_REPLACED

Why are horror houses such a mainstay of the scary movie genre? It’s a concept that has been used time and time again, whether it be for the gory antics of The Last House on the Left or for the more subversive, spectral encounters of The Babadook, there is something about a fright-filled homestead that really hits a nerve with people.

Perhaps it’s the ultimate subversion of what makes us feel most safe that audiences get a kick out of. Where horror is concerned, taking something innocuous and perverting it into a symbol of fear is not only a commonly used dramatic device, it’s present in almost all scary films. END_OF_DOCUMENT_TOKEN_TO_BE_REPLACED

Ah, Valentine’s Day, one of my favorite holidays. Crappy chocolate, endless disappointment, and all in a half-hearted attempt to receive a punch on the shoulder at the end of the night. With Valentine’s Day, we always receive a film centered about romance, so I thought I’d take a look at the best film couples of the past decade. I based this list off of some criteria, including sacrifices, spark, dialogue, and just general chemistry. That should explain the absence of Anastasia and Christian of Fifty Shades, Bella and Edward of Twilight, and Belle and Beast from Beauty and the Beast.

I also decided to limit this list a bit and not have couples which are hardly even together, so as much as it hurts to say, Simon and Blue from Love, Simon will not be featured on this list, because they were only together for about four minutes. So, let’s talk about the five couples (ordered from good to greatest), so you can convince your significant other to watch these instead of The Kissing Booth again. Without further ado, let’s take a look through the best movie couples. END_OF_DOCUMENT_TOKEN_TO_BE_REPLACED

It’s February 2020 and Storm Ciara is battering the UK. Trees are down, ferries are struggling to dock at ports across the nation and hundreds of flights have been cancelled. In typical British fashion however, the biggest debate is over the pronunciation of the storm name itself rather than the path of destruction it is making all over the country. Is it “see-ara” or “kee-ara”? Who knows.

With the majority of the UK population locked indoors, it got me thinking about the best movie storms to have ever graced the silver screen. This doesn’t incorporate disaster scenes as a whole (we’ve got another top 5 for those), just those involving storms of some nature, weather (see what I did there) on land, in the air, or at sea.  From terrifying tornadoes to swelling seas, here are our picks for the top 5 movie storms seen in film. END_OF_DOCUMENT_TOKEN_TO_BE_REPLACED

Turning 30 is a big deal, and don’t let anyone tell you otherwise. With some trepidation, I entered my fourth decade on this earth in August 2019, and the lack of a world-changing event was surprising by its absence. Perhaps I had built it up to be something more than it was.

Nevertheless, I intend to spend my next decade seeing as many places as I can, trying new things and watching as many films as possible. With that in mind, I decided to get right back to where I started – way back in 1989. These are the top five movies from 1989: the year of my birth. Let me tell you, this wasn’t an easy list to make – 1989 had some cracking films released, but I’ve managed to narrow it down to just five. Without further ado, let’s take a look. END_OF_DOCUMENT_TOKEN_TO_BE_REPLACED

Theme by Anders Norén — Up ↑