Why are horror houses such a mainstay of the scary movie genre? It’s a concept that has been used time and time again, whether it be for the gory antics of The Last House on the Left or for the more subversive, spectral encounters of The Babadook, there is something about a fright-filled homestead that really hits a nerve with people.

Perhaps it’s the ultimate subversion of what makes us feel most safe that audiences get a kick out of. Where horror is concerned, taking something innocuous and perverting it into a symbol of fear is not only a commonly used dramatic device, it’s present in almost all scary films.

A scary house is something I’ve always personally enjoyed in the genre though. I mean, who doesn’t love to see a horde of plague infested zombies tear through a cabin in the woods? With that being said, let’s jump into my ultimate list of horror houses in film.

Nothing says horror quite like Hill House from The Haunting. Adapted from the 1959 novel by Shirley Jackson, The Haunting sees a group of paranormal investigators take up residence at a property steeped in a bone-chilling history of death, trauma and terror.

It doesn’t take the guests long to realise that something is very wrong at Hill House. Spirits walk the halls; doors open and close of their own volition; the house itself is almost a living and breathing organism, with walls that bend and creek as the echoes of the past resonate down the corridors.

One thing that makes Hill House so special and sets it apart from the other horror houses in this list is the psychological effect that it has on its inhabitants. It isolates the weak and manipulates them to the point where their fear turns into a surreal longing to die between its walls.

#4 Eel Marsh, The Woman in Black

Eel Marsh Estate from The Woman in Black makes the list just as much for its location as for the house itself. Sure, the building is terrifying, but there is something about its swamp encircled locale that really sets it apart from its contemporaries.

Eel Marsh is a terrifying prospect by day, but come nightfall, things take a seriously sinister turn. The estate becomes cut off from all other life when the tide comes in, leaving any poor souls that remain there stranded on the ghoulish island with no way to escape till daybreak.

The house itself is dank, dark and thoroughly miserable. Having said that, the woman in black tends to only kill children, so provided you’re not there for a summer getaway with the kids, you’ll probably survive the night.

Whilst the other houses on this list are focused on horror of the spectral kind, Hillbilly Mansion (not its actual name I made it up for a catchy subheading) is more of a blood and guts establishment.

In fact, if I had to choose a night at one location from our top 5 houses, Hillbilly Mansion would likely be last on my list – I’d rather take my chances with a vengeful ghost than risk a chainsaw up the tushie.

Despite the fact that The Texas Chainsaw Massacre was released almost 50 years ago, it still very much remains a classic of the video nasty genre. Renowned for its visceral gore, the set design of the house mirrors the on-screen violence perfectly making it a thoroughly repulsive and unpleasant home from home.

The Saeki Home from The Grudge makes it onto the list not for the home itself (It’s actually a fairly average Japanese house) but for the fate of those who dare enter it.

The entire plot of The Grudge is predicated around the idea that when someone is violently murdered in an emotionally traumatic and agonising way, their spirit (called an “onryō”) essentially becomes part of the home in which they died. Unfortunately for the characters in the film, the Saeki Home happens to have been afflicted with such a curse.

All seems well upon entering, but by stepping over the threshold you invoke the wrath of a particularly nasty ghostly apparition who will subsequently hunt you down wherever you go. Despite the house itself being largely irrelevant in terms of the threat it poses; it still houses some of the most terrifying scenes ever committed to screen.

After being thoroughly terrified by the film at a young age, the thought of popping my head up into an attic space to take a quick peek around still fills me with dread to this day.

The Bates motel is an indisputable icon of the horror genre. Watching Psycho back now it’s all rather tame, but at the time it was one of the scariest sets in cinema. The seedy motel where young women are lured to their death was a sight unseen at the time of the film’s release.

But hey, we’re not here to discuss the top 5 hotels of horror, Bates Manor is just as iconic as the motel, perhaps even more so. Testament to this is the fact that the classic design has been reproduced countless times across cinema and in wider media.

For a great example of this, check out UnEarthly Clothing’s stunning interpretation of the design in a glorious T-shirt format. When something is as iconic as Bates Manor, it effortlessly transfers to other mediums. 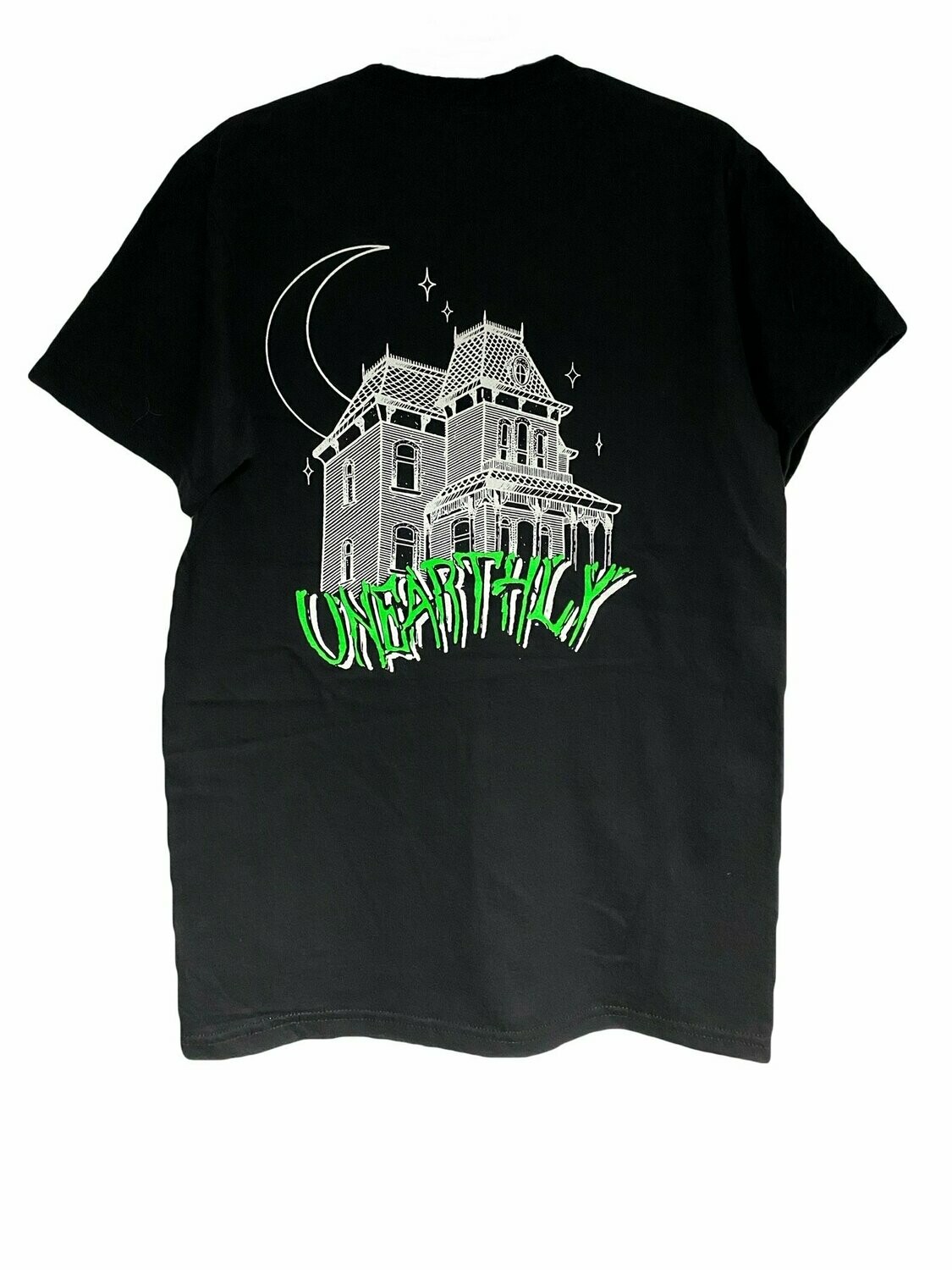 Available at only £15.00, what better way could there be to shout about your horror fan credentials, be warned though, I’ve been reliably informed by UnEarthly Clothing co-founder Beu Smith that there are only a few of these iconic Abandoned Mansion T-Shirts left in stock. In other words, get one while you still can!

There will be plenty more stylish designs coming to UnEarthly Clothing soon so be sure to follow them on Facebook and Instagram when you head over to make your purchase!